A randomised controlled clinical trial of a total of 91 patients with a BMI (body mass index) of 23 or greater were divided into 3 groups. Group 1 received the 5 acupuncture point combination. Group 2 received only one acupuncture point and group 3 received sham acupuncture. At both 4 and 8 weeks following the treatment regime, measurements were taken to determine clinical effectiveness. It was discovered that the 5 acupuncture point combination was the most effective yielding over a 6% reduction in the body mass index. The one point acupuncture treatment regime yielded just under a 6% improvement in BMI. Both groups 1 and 2 showed significant improvements in BMI and weight loss. 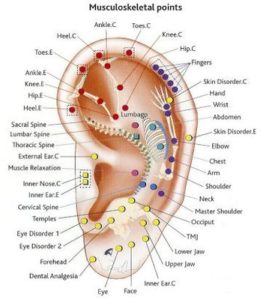 A special type of tape retained the needles over the 8 week period for groups 1 and 2. The same tape hid the absence of needles in the sham group. The needle depth was 2 millimeters in the auricular acupuncture points. The 5 point acupuncture treatment caused the most significant reduction in waist circumference and BMI. Body fat percentage dropped significantly in the 5 point acupuncture treatment but not in the other groups.

The 5 auricular acupuncture point combination is commonly employed for digestion issues. Gastric and duodenal ulcers are commonly treated with a similar combination of auricular stomach or duodenum, brain, mouth, spleen and shenmen. The 5 acupuncture point weight loss combination used in the study includes auricular shenmen, located in the triangular fossa at the bifurcating point between the superior and inferior antihelix crus at the lateral 1/3 of the

The spleen point has two major auricular locations; one is located on the middle of the back side of the ear. The other location is at the lateral and superior aspect of the cavum concha. The cavum concha point is more commonly applied in clinical settings. The spleen auricular point is traditionally used for strengthening the spleen and harmonizing the stomach. It helps to produce ying-blood and benefits the muscles. Common indications treated with the spleen auricular point are uterine bleeding, abdominal distention, diarrhea and other digestive dysfunctions. The stomach auricular acupuncture point is located at the end of the cruz of the helix in the cavum concha. It is the area formed by the end of the crus of the helix and the border of the lower antehelix cruz.

The endocrine point used in the 5 acupuncture point combination is located in the cavum concha in the intertragic notch. The endocrine point is classically applied within TCM (Traditional Chinese Medicine) for removing liver qi stagnation, regulating the menses, invigorating the blood, expelling wind and benefitting the lower jiao. Indications for use of this auricular point include skin disorders, impotence, irregular menstruation and endocrine system dysfunction.

The hunger auricular acupuncture point is located on the lower part of the tragus in the direction of the transitional fold near the facial skin. The hunger point can be used to up-regulate or down-regulate sensations of hunger. It is used for issues of anorexia, bulimia and digestive disturbances.

This article originally appeared on HealthCMI.